This is an old blog I wrote in May 2012 for the DOXA Connexions program. Big Boys Gone Bananas is a documentary follow-up to the film Bananas!* detailing the legal battle the filmmaker Fredrik Gertten with Dole. The film is a Coproduction between Sweden and Canada. Read on! 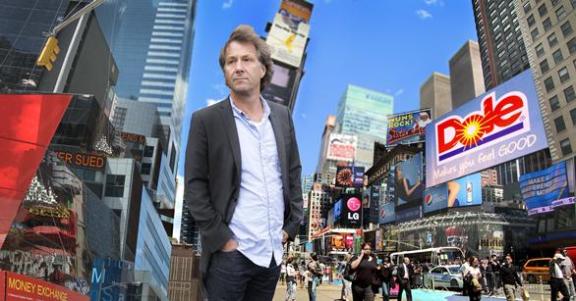 The tagline for the screening at the Pacific Cinematheque: Fredrik Gertten says film is about freedom of speech and the right of the “little person” to take a bite of JUSTICE out of the big boys.

Talk after the screening with Randy Hooper, a Fair Trade activist with Discovery Organics

Big Boys Gone Bananas is the story of Fredrik Gertten and his production team in Sweden and their battle against DOLE fruit company after the release of their first documentary BANANAS!* depicting the mistreatment and abuse of Nicaraguan banana plantation workers. The fruity giant came after Gertten before the world premiere of his film at the Los Angeles Film Festival, and proactively came after the filmmaker and began to spread falsities about his filmmaking practices and his documentary subjects in the film BANANAS!* before even seeing it.

The film does not use the opportunity as a way of making Fredrik Gertten a superhero, and BANANAS!*, the victim of corporations and the media. Instead, it follows the legal processes and investigates the ways in which mainstream media and government can be controlled by corporations as a way of educating the public. The story of Gertten and BANANAS!* is to show how this seemingly impossible force can be beaten, and is shown as a source of inspiration for others hoping to achieve similar goals that involve overcoming big industry and big money through grassroots and bottom-up efforts and storytelling.

The film calls out against PR firms, news media, and even professionals that have been brought over to the “dark side” by putting their name on an opinion piece written by a PR company, paid for by a client such as DOLE.

There is a call for support for independent storytellers, such as bloggers who can have a large role in influencing public opinion like the Swedish blogger who called for a DOLE boycott.

However at the end of the film, there were some issues that I still couldn’t find solutions for within the film itself. I don’t mean to say that a film is supposed to give the answer to the problem it exposes, but these are general questions I would like to see more discussion on as the film has screened as a part of the Justice Forum.

First of all, the success of Gertten against DOLE would not have been possible without the Swedish government. The Swedish government is much more centralized that the Canadian government, and is already suspicious of American neocolonialist tactics and reacts by being very protective of it’s own economy and industries. Without the support of the Swedish government, the lawsuit would not have been dropped. Do you have any ideas on how one might fight successfully against large corporations in a country like the US and Canada, or any idea on how the fight  would have played out in North America instead of Sweden?

I asked this question to Fredrik during the Q&A after the screening. His answer was that nothing is impossible, even in Canada. He directed that we support storytellers, challenge government, and break the isolation of these storytellers created by the media (that is being influenced by the corporations). He also called for journalists to be more active in questioning their sources, and for the public to support them.

Ii found the answer to be a little vague, but of course I don’t expect him to be familiar with how difficult it is to make progress in activism in a city such as Vancouver. Perhaps I am a pessimist, but I think it would take three Fredrik Gertten’s to have a chance at making the Canadian government take a direct stand against DOLE.

Lastly, the Justice forum is sponsored by CUPE BC, a worker’s union that I myself am a member of. The film was introduced by a Union Representative (I apologize for not remembering his name) and it brought up the interesting idea of increasing collaboration between independent filmmakers and unions. From audience suggestions during the Q&A, it was clear that both are invested in rights and quality of life rather than money. Why should there not be more funding for projects such a BANANAS!* from local unions?

P.S. If you are interested in taking action against DOLE, start by buying “FAIR TRADE” bananas. Also, take a look at the 10% shift program being pushed by CUPE BC. The program takes 10% of the money you spend, and reinvests it into local businesses such as grocers and markets, giving them more buying power and ability to compete with chain supermarkets locked into contracts with corporations such as DOLE.